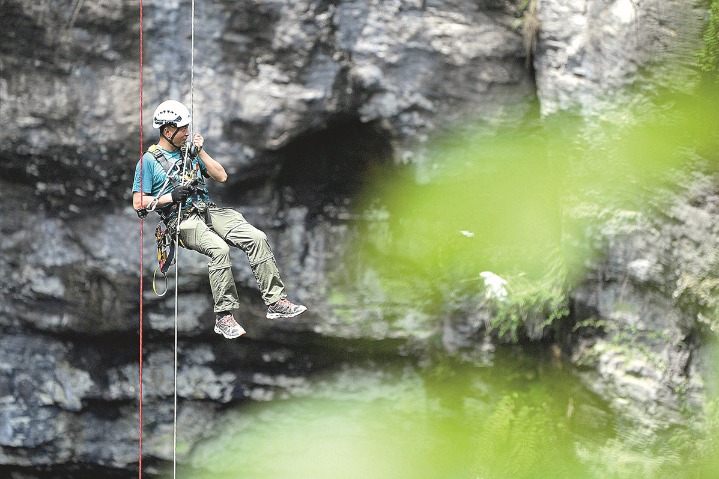 With his helmet on his head, Li Dezhi, 38, squeezes the motorcycle’s clutch lever hard, presses the start button and waits for the exhilarating sound of the engine starting.

CEO of Aosheng Extreme Distributor on weekdays and a semi-professional off-road motorcyclist on weekends, Li said riding in the dirt away from the city and performing jumps and stunts gave him a sense of freedom and mental stimulation. .

Li is not the only adventure sports fan. Outdoor adventure activities, such as off-road motorcycling, rock climbing and caving, are gaining popularity among Chinese consumers, and a booming market in China has formed around these activities.

On lifestyle sharing platform Xiaohongshu, relevant posts topped 560,000 in early September. On the Douyin short video platform, posts depicting people venturing into caves amidst glaciers and hiking in the Tibet Autonomous Region’s “no man’s land” were among the most popular topics. trending over the past two years.

A report by the China Adventure Association estimated that the total output of China’s outdoor adventure industry will exceed 1 trillion yuan ($139.8 billion) by 2025. It predicted that at as living standards rose and young city dwellers began to look for ways to vent through higher disposables. revenues, the industry will enter a 10-year rapid development stage since 2026, with an annual growth rate of more than 10%.

Li, as the head of a sports accessories business and a veteran of outdoor adventure activities, is planning a new venture to sell off-road motorcycle gear to tap into the growing market.

“I love adventure in nature. Spending time around mountains and rivers helps me reconnect with myself, while doing stunts gives me the feeling that I can overcome the difficulties I face and achieve something,” he said.

Li founded his company in 2008 out of a passion for snowboarding. “I started my business selling ski equipment. At that time, the sport was less well known and our customers only numbered a few hundred ski enthusiasts in Beijing.”

“In less than two decades, we have had many buyers and about 90 distributors across the country. We then expanded our business into skateboards and will launch a new off-road motorcycle industry. We are confident about the market outlook.”

A report by the China Adventure Association indicates that about 23% of people participated in at least one type of outdoor adventure activity in China in 2020, and this number has shown an upward trend over the past two years. last years.

Of those surveyed, those who had participated in rock climbing or mountaineering accounted for 40.75% and about 10.83% were mountain bikers.

Yang Yi, an independent film producer, just started rock climbing three months ago. She said climbing helps her focus on the moment and let go of pressure and anxiety.

“The first time I joined the club was the day I was fired from my previous job. I was a bit depressed, but when the coach taught me how to start climbing, I forgot about the pressure of work and life and was able to refresh my mind.”

“I started practicing in professional indoor clubs in Beijing. Recently, I was invited to do outdoor climbing, but I just watched and learned because I’m not skilled enough and I have security issues.”

The China Adventure Association report showed that about 72.26% of respondents voted safety issues as one of the main reasons for keeping them away from outdoor adventure activities.

They didn’t worry for nothing. The association’s data showed there were 352 safety-related accidents as people engaged in outdoor adventure activities last year, up 113% year-on-year, of which 287 were resulted in injury or death.

Authorities have responded to latent risks in the new and lightly regulated market and are tightening safety protocols on outdoor adventure activities. The Beijing municipal government launched seven measures earlier this year, urging relevant departments to post signs in dangerous but popular adventure areas and calling for more professionally trained and licensed organizers.

Experts also said the government should expand support for the industry. Yang Zhongqi, an expert from the Chinese Academy of Forestry, told the Science and Technology Daily news agency that there was an imbalance between the growing demand for outdoor adventure activities and the lack of teams. sufficient emergency relief.

Yang also called for new efforts to establish a safety alert system that will provide participants with information on weather and road conditions in outdoor adventure activity areas through location and location. electrical monitoring.