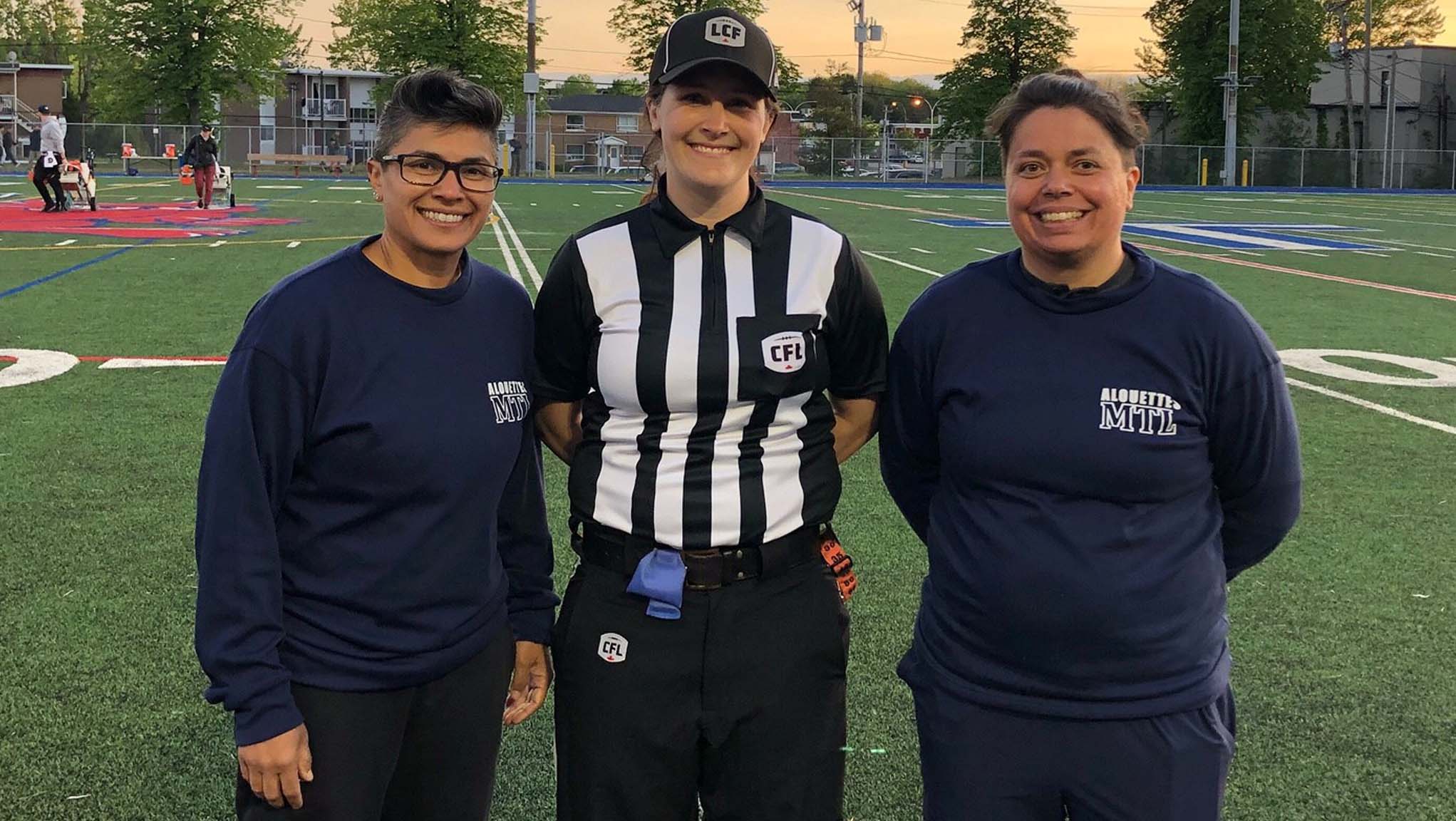 Despite the many differences, Andreanne Dupont-Parent sees the similarities between operating a CFL team and managing a club in the fledgling Women’s League Central Canada.

Dupont-Parent is commissioner of the three-team CCWL and general manager of the Montreal Blitz. She has spent the last few weeks at training camp with the Montreal Alouettes as one of nine participants in the CFL’s Women in Football program.

“It’s a great learning curve,” Dupont-Parent said. “I’m learning a lot about the business side of things, recruiting, running a training camp.

The goal of the Women in Football program is to promote inclusivity, diversity and equity across the league. Many of the women involved are looking to improve their coaching skills, but Dupont-Parent is more interested in football management and operations.

With the Alouettes, she worked with Eric Deslauries, Senior Director of Football Operations and attended meetings with General Manager Danny Maciocia.

“I’m here to gain experience in all areas of the team, all different aspects,” she said. “At the end of the day, to manage a team (like) the Montreal Blitz, you have to touch everything, from logistics to players to recruiting.”

Working with the front desk staff and spending time in the field during practices gave Dupont-Parent a hands-on learning experience.

“It’s seeing the concepts you learn in terms of management being applied,” she said. “You have to work as a team to make sure everything works out in the end.

“There are the logistics of moving a team, planning practices, building a schedule so everyone is super efficient and knows what they have to do. The professional aspect of this camp, the way it is organized, is pleasant to see and experience.

The Central Canadian Women’s League was launched in 2021. Besides the Blitz, there are the Quebec Phoenix and the Ottawa Rebels. Over the next seven years, Dupont-Parent hopes to see the league grow to four or five teams in Ontario and Quebec.

The knowledge Dupont-Parent gained with the Alouettes can be applied to both league building and Blitz operations.

“Being a newer league, I hope to incorporate some of the procedures (from the Alouettes) and the way they handle things,” she said. “At a team level, it’s just about being more efficient with the different aspects of running a team, writing reports and building that structure to make sure everyone is on the same wavelength.

All Alouette staff were supportive and helpful.

“They understand that maybe I don’t have the level of knowledge that they have just because of their years of exposure to this level of football,” Dupont-Parent said. “They are very welcoming, everyone is very professional.

“Even with their busy schedules, they are ready to help. It really is a great frame. »

Dupont-Parent’s road to football began on the ski slopes. Growing up, the Montreal native was a competitive downhill skier, specializing in giant slalom. After high school, she started playing football, first as a defensive lineman and then as a linebacker.

LEARN MORE ABOUT WOMEN IN FOOTBALL
» Landry: Saadia Ashraf is a true builder of the game
» Organizers see a world of opportunity with the women’s league
» Tanya Walter breaks through with the Lions

Skiing and soccer seem to have little in common, but Dupont-Parent can draw a parallel between the sports.

“Without the athletic training I was taught in alpine skiing, I don’t think I would have been able to perform on the football field,” she said. “I think downhill skiing training was one of the best training sessions I could have had.

“It’s very similar. It’s power, it’s quick feet, being steady, knowing how your body moves through space. It’s very similar in terms of the fundamentals you need to go through a season without too many injuries and to perform well.

Dupont-Parent was signed to play for the Blitz, a team that has been around since 2001 and was part of the Independent Women’s Football League, an American football league that had its final season in 2018.

She was also a member of the 2010 Canadian team that lost to the United States in the final of the inaugural IFAF Women’s World Championships.

“I have a background in industrial design,” she said. “I was lucky enough to be able to manage certain projects. I was slowly introduced to the management aspect of the team.

Dupont-Parent misses playing but knew it was best to focus on her roles as Blitz general manager and league commissioner.

“I didn’t think I could give my 100% on the pitch,” she said. “I really want to provide all athletes with the most worry-free experience so they can show up for training, train hard, and go home and have the support and logistics.”

Having a women’s soccer league in Quebec and Ontario will help the sport grow.

“It’s all about exposure,” Dupont-Parent said. “Coaches in well-known and established programs don’t know there is an option for women.

“They have girls or women who play but don’t know where to send them when they get to a certain age. It’s about knowing that the team exists and can play football.

The involvement of the CFL also increases the visibility of the sport.

“The collaboration with the Alouettes and these programs will help greatly,” said Dupont-Parent.