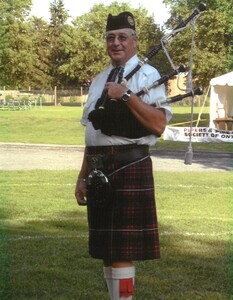 Howard H. Carron, 84, of Plattsburgh, died June 9, 2022.
Howard was born March 1, 1938 to Edward and Laura (DeFayette) Carron of Redford, NY.
He attended Sallaz Academy in Redford and graduated in 1956. He enlisted in the United States Navy after graduation and was assigned to USS Zelima AF 49, Oakland, California . After four deployments to the Far East, he was reassigned as MM2, to USS Laws DD 558. Upon completion of his enlistment in 1960, he became an employee of the New York State Department of Corrections in Dutchess County. In June 1965, he became a New York State Trooper and was stationed at numerous stations in Albany and then in B Troop. Howard found a new hobby woodworking and soon began turning on the turn. His woodturnings adorn the tables of many who own his one-of-a-kind salt and pepper mills.
Howard was also active in the Boy Scouts and was the scout leader of Saranac, NY Troop 35 for a few years. He then became the scout leader of Troop 39 in Plattsburgh. He received the Scoutmaster of the Year. He enjoyed teaching boys new skills and watching them grow into successful men. While working as a soldier and managing a family, he found time to return to school. He attended SUNY Plattsburgh, earning his degree in speech and hearing.
He and his wife loved to travel, and trips to Hawaii, Europe and the Caribbean were memorable trips. He also had a love for sailing and sailed his own boat for over 40 years. He became a certified scuba diver and has spent many vacations, diving in many islands in Central America and the Caribbean.
Howard also enjoyed skiing and became a senior member of the National Ski Patrol. He also loved to fly and was able to fly small planes whenever he could. Towards the end of his life he took up another hobby, playing the bagpipes. He and his boyfriend, another retired soldier, decided to form a band with the help of two other law enforcement men, and started the Plattsburgh Police Pipes and Drums. He was also a member of the New York State Troopers Pipes and Drum band and enjoyed playing with his fellow Troopers. When he and his wife spent their winters in Florida, he also joined a band, the St. Andrew’s Pipes and Drums of Tampa Bay. He spent several days enjoying the company of the band members.
Howard was an active member of the Association of Former New York State Troopers and the NYS Troopers PBA, and the American Association of State Troopers.
He is predeceased by his beloved wife, Marion, of 52 years in 2020. He is also predeceased by his father, Edward and his mother, Laura Carron, his younger sister, Carol and his stepson Rickey Walker.
Howard is survived by his daughter-in-law, Karrie Breyette (Donn) of Morrisonville, NY, his son Craig of Suffolk, Virginia, and Maria Walker of West Charlton, NY, five grandchildren, Jason and Jamie Breyette, Jessica Pinson and Justin Walker, and Michelle Carron Helms, five great-grandchildren, Hailey Pinson, Ty and Drew Breyette and Isla and Aria Breyette, his sister, Rita M. Larche of Dannemora.
Visitation will be on Monday, June 13, 2022 from 3-6 p.m. at Brown Funeral Home, Plattsburgh. Funeral mass will be held on Tuesday, June 14, 2022 at 11:00 a.m. at the Brown Funeral Home Chapel. Entombment will follow at the City of Plattsburgh Community Mausoleum.
Donations may be made to the New York State Troopers Foundation for the NYST Pipes and Drums or the North Country Honor Flight.
Arrangements entrusted to Brown Funeral Home, 29 Broad St., Plattsburgh, NY 12901, (518) 561-3980. Online condolences can be offered at www.brownfuneralhomeinc.com