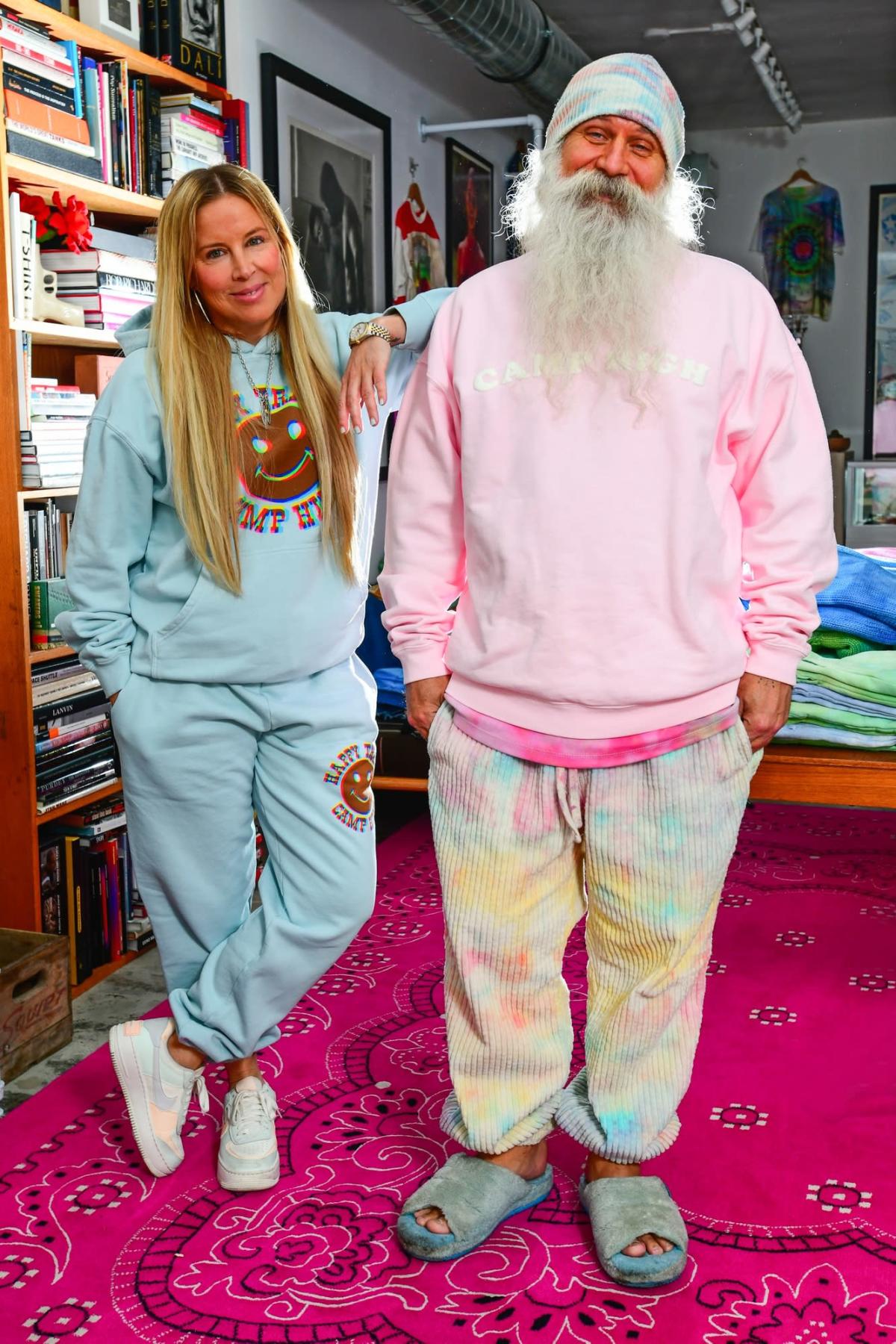 If Grateful Dead co-founder Jerry Garcia were still alive, he’d be shopping at Camp High, the Los Angeles brand that stands out for all things psychedelic.

At the new Camp High store in the Pacific Palisades, the range of tie-dye clothing would make any Dead Head proud, and the expanse of tie-dye joggers, sweatpants, sweatshirts, shorts, cable-knit pants, T-shirts and lid hats is proof that, at least in Los Angeles, the trend isn’t going anywhere.

Burton Snowboards veterans Greg and Anne-Marie Dacyshyn launched Camp High in 2018, but only opened their first store late last year and things are taking off. “The philosophy of Camp High is to live your best life and live your highest self,” Greg said.

One of Camp High’s fans is Utah Jazz basketball player Jordan Clarkson, a notable NBA fashion icon. (He was seen last year wearing a kilt by Fear of God.)

Around the same time, Jordan was spotted wearing various Camp High outfits, including a tie-dye Camp High tracksuit and other Camp High gear, which further enhanced the brand’s popularity.

Clarkson started shopping more Camp High looks, which were featured on LeagueFits, an Instagram style account that puts basketball fashion in the spotlight.

Now, Camp High is working with Clarkson and his 78 Studios brand to develop a retro-style button-up shooting jersey and matching shorts. This is a Camp High x 78 Studios project co-created by Clarkson and Greg Dacyshyn with the jersey priced at $1,650 and the shorts at $1,250. It will soon be on the shelves of Maxfield.

The throwback set is a lightweight knit whose yarns are made from recycled soda bottles and upcycled cotton scraps. All yarns are spun in Los Angeles and every piece, including trim, is hand woven.

Other looks will follow. “We’re going to sit with him because he’s a little off basketball season. We’ll put his spin on it and his idea of ​​color and go from there,” Greg said.

Another Camp High fan is musician John Mayer of Dead & Company, the band started with former Grateful Dead musicians. The musician loved the retro Dead-Head-style clothing so much that he is now a partner in the business, Greg said.

Camp High is offered at a variety of stores and websites around the world, including Jinji in Paris, Browns in London, Slam Jam in Italy, Union Los Angeles, Market in Miami, Mr Porter and Revive.

But the heart of the brand is in the 1,000 square foot space on pedestrian-heavy Sunset Boulevard, where the collection changes weekly and the decor is seriously fun. There’s a pinball machine in the store and lots of bright colors.

When it comes to clothing, premium fabrics and details are paramount at Camp High. Most yarns and fabrics come from Italy and Japan. But almost everything is made locally, including knit sweaters and pants made by PDR Knitting, a hand-knitting company that caters to high-end brands.

Quality imported materials and handcrafted production are why Camp High’s Zen Corduroy Pants are $270. An ice-dyed waffle hoodie is $210 and French terry tie-dye sweatpants are $170.

“I think people who buy our products appreciate good design and good quality,” Greg said. “We are proud of our fabrics.”

Prior to starting Camp High, Greg and Anne-Marie worked for decades at Burton Snowboards in Burlington, Vermont. When Greg left in 2017, he had been the brand’s creative director for years and was known as one of snowboarding‘s most colorful characters. Anne-Marie was Burton’s first Marketing Director. She until recently became president and chief marketing officer of Dosist, whose products include dose-controlled cannabis pens.

After leaving Burton, the Dacyshyns moved to the Los Angeles area and began the next chapters of their career. “I wanted to do something that was soft clothes, comfortable things that you could put on in the morning, pass out and wake up and start all over again,” said Greg, who hasn’t worn closed shoes in years. .

The pandemic pushed this idea as people embraced pajamas and loungewear.

Today, Anne-Marie, with the help of Greg, is launching Camp High Collective, an agency she runs as president. “We provide brand marketing services to other businesses,” she said. “We know how to create brands that really resonate.”