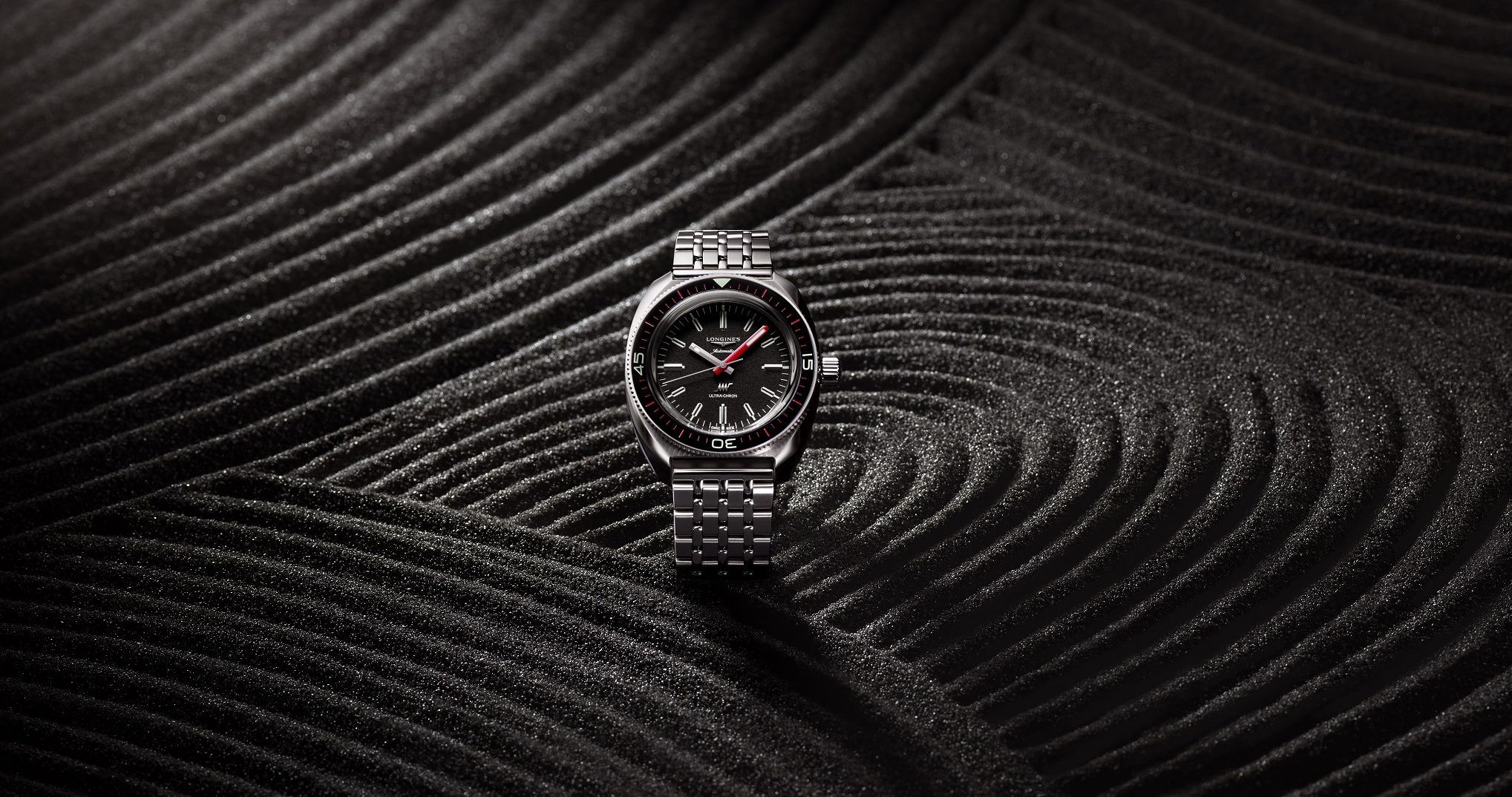 Inspired by its 1968 predecessor, the new Longines UltraChron is actually the culmination of over 100 years of mastery of high frequency sports timing instruments.

In 1968, Longines launches the Ultra-Chron Diver, the first diver’s watch equipped with a high-frequency movement. At the time, it had already established itself as a pioneer in both sports timing and high-frequency technology. As early as 1878, Longines had developed its first chronograph movement, which was soon mounted in a case engraved with a jockey and his horse. These stopwatches were very popular with jockeys as well as race spectators.

In 1912, a new step was taken when Longines forged its first official partnership with a horse show in Lisbon. Since then, he has timed many competitions and equestrian disciplines including dressage and flat races. To measure close competitors, Longines produced chronometers with split-seconds hands as well as high-speed movements accurate to 1/10th or 1/100th of a second.

From its Swiss origins, Longines also excelled very early in the timing of winter sports, starting with the International Week of Winter Sports in Chamonix, France, in 1924. A few years later, its chronometers timed the Championships of the skiing world. In 1939, Longines introduced a ski chronometer with a high-pulse movement and split-seconds, measuring 1/10th of a second. Nine years later, he was selected to time the legendary downhill race from Kandahar to Sankt Anton, Austria. The organizers of the 1950 World Ski Championships in Aspen, USA, chose Longines as official timekeeper. Today, the Swiss watchmaker is the official partner and timekeeper of the FIS Alpine Skiing World Cup tour and championships.

When cars from all over Europe took part in the first edition of the Monte-Carlo Rally in 1949, the timing was entrusted to Longines, a status it would retain for more than 30 years. Along the way, he pioneered a special punch-printing device called Printogines. Equipped with a clock with an eight-day power reserve, it allowed competitors to punch their own control card at each checkpoint over 5,000 km away. The device proved so useful that Longines was appointed to time all the famous rallies of its time, including the Coupe des Alpes, the RAC Rally of Great Britain, the Mille Lacs in Finland as well as the Acropolis Rally in Greece. and the Côte d’Ivoire Rally in Africa.

In 1951, Longines was asked to time the biggest cycling event in the world, the Tour de France. The race through France was an excellent opportunity to test a new system combining a camera at the finish and a device recording each competitor’s time on film. This timing system solved the photo-finish problem when tightly packed competitors reached the line at almost the same time. In fact, the former president of the French Cycling Federation, Jean Pitallier, personally timed every edition of the Tour de France from 1973 to 1980 with a pair of Longines high-frequency split-second timers.

The high point of his career as a sports timekeeper in the 20th century came in 1949 when Longines introduced a timing system for motor racing capable of recording 1/10th of a second via a series of photos. This led the brand to time the famous Monaco Grand Prix in 1950, Formula 1’s inaugural season, the Indianapolis 500, as well as Formula 1 races in Barcelona, ​​Buenos Aires, Spa, Zandvoort and Bern, as well as many other racing events. In the following years. In 1954, Longines had developed the Chronotypogines, which used a sensor to automatically start and stop time. In 1980 Longines pioneered a new method to time each car independently using radio waves, which led to its appointment as official timekeeper for all Formula 1 races from 1982 to 1992.

The new Ultra-Chron is inspired by the aesthetic code and professional diving characteristics of the 1968 model. Featuring a unidirectional rotating bezel, screw-down back and crown, it offers great readability and is water resistant. 300m. Recognizable at first glance, its 43 mm cushion-shaped steel case features a diving bezel that sports a sapphire insert with luminescent accents. The eye-catching black grained dial features a white minute track with alternating Super-LumiNova coated batons and rhodium-plated appliqués. The original Ultra-Chron logo is proudly applied to the dial and embossed on the caseback. The modern edition is distinguished by a red minute hand coated with Super-Luminova for optimal readability.

At the heart of the watch is caliber L836.6, a high-frequency in-house movement whose hairspring oscillates at 36,000 vibrations per hour (10 vibrations per second). These movements, launched by Longines in 1914 (to 1/10th of a second) and 1916 (to 1/100th of a second), improved the precision of timekeeping. From 1959, Longines used high-speed movements to increase the precision of its watches. Thanks to a reduction in the disturbing effects of shocks, or changes in the position of the movement, the movement at high speed proves to be more stable.

Designed both to arouse emotion among aficionados of iconic timepieces and to seduce newcomers wishing to wear a bit of watchmaking history on their wrist, the Longines Ultra-Chron is available in a leather or steel bracelet, accompanied a black NATO strap made of recycled material.