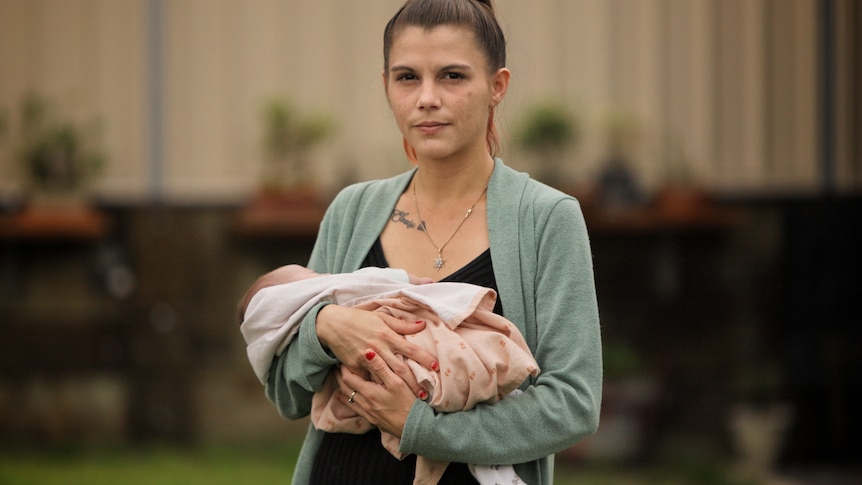 Single mother Amie Rabinski has been couch surfing and living without shopping bags for 18 months as she waits to be approved for a rental amid Queensland’s housing crisis.

The 27-year-old – who has two daughters Ruby, 7, and four-week-old Asha-Rose – said she had applied for around 200 properties but could not find accommodation.

“It’s been very difficult, a lot of places turn you down or don’t look at you,” she said.

“They cancel the inspections or say you don’t meet the criteria.

“I used to get accepted within a week, I’ve never had such a hard time.”

Ms. Rabinski has jumped between living with friends and her parents, but wants her own home in Logan for between $300 and $360 a week.

Her belongings and those of her daughters fill several shopping bags to make it easier to get around – but the occasional disability support worker is desperate for a place of her own.

“Living without bags is very difficult, especially for the eldest,” she said.

“She’s not very happy living without bags, having her toys in bags and constantly having to go back and forth between different places.

“It’s really upsetting and depressing, no one should have to go through this.

“It makes me feel like it’s not a lucky country anymore, it’s becoming more of a greedy country with the way things are going with housing.”

‘Depression through the roof’ after 156 rental requests

Disabled pensioner Michael Powell lived with his wife Alison in the same tenancy in Riverhills in west Brisbane for 17 years, but had to move earlier this year when the owners wanted to move in again.

In five months, the pair made 156 rental applications and took part in 60 inspections before finally securing a unit in Brassall, Ipswich.

“It was just pure luck on our side that the estate agent hit it off with a retired couple trying to get into another place, otherwise we wouldn’t have been here,” he said. .

“It was very stressful, the anxiety exploded, the depression exploded.”

The 63-year-old said he felt estate agents rejected their applications because they were retired.

Mr Powell said the federal government must urgently increase support through housing assistance and the state government must do more to use land and build more public housing.

“The local prison reserve has almost 5,000 hectares of land, if you tear it down you can put knockdowns on it that can be built in 18 months,” he said.

A “perfect storm” of pressures

Queensland’s housing supply problems are the result of a number of complex and multi-faceted factors that are also felt nationally.

Around 50,162 people moved to Queensland from other states last year – largely due to the COVID-19 pandemic – according to figures from the Department of State Development, Infrastructure, Governments premises and planning.

Elin Charles-Edwards, a demographer and senior lecturer at the University of Queensland (UQ), said a combination of things like higher-than-expected interstate migration and population growth were putting pressure on supply of state housing.

“The underlying driver is population growth, but it’s not as simple as that factor,” she said.

“We’ve seen more growth in the number of households than people because our population is aging, so it’s kind of a perfect storm.”

Dr Charles-Edwards said a study by UQ’s City Impact Lab said young adults and baby boomers were bearing the brunt of the crisis, with these groups increasingly likely to be living with other people.

“Our analysis of Australian census data between 2016 and 2021 saw a shift that told us that now young and old Queenslanders are less likely to form households,” she said.

“It suggests an adaptive response to housing market constraints, so if housing is scarce, we see these people adapting and moving in with family or friends.”

There are currently 45,958 people on the social housing waiting list from 27,437 applications.

What are the solutions ?

The Queensland Government is hosting a statewide summit tomorrow to address critical housing issues such as unlocking land and housing supply, accelerating social housing and finding solutions with all levels of government and the private sector.

A number of strategies have already been ordered by the state government in an attempt to relieve the housing pressure cooker.

After a roundtable on housing held earlier this month, around 200 unused beds in a vacant student housing block on Griffith University’s Mount Gravatt campus will be converted into emergency housing.

At the time, Deputy Premier Steven Miles said that with Queensland facing a shortage of builders and supplies and rising costs, “the best early gains are in repurposing underutilized buildings that are already built”.

The Catholic Archdiocese of Brisbane has also assessed its property and identified around 87 blocks of land or sites that could provide housing opportunity.

Mr Miles has also urgently changed planning laws so Queenslanders can rent unused granny flats for the next three years.

The Queensland Government has also commissioned industry experts to investigate the impacts of short-term rentals such as AirBnB and Stayz properties on the state’s housing supply.

Mr Miles said state and local governments were undertaking an audit of land across the state that could be used for emergency housing.

Tony Matthews, senior lecturer in urban and environmental planning at Griffith University, said the state government needs to look at other ways to achieve density on land zoned for housing.

“When it comes to density, there are many, many ways to achieve density without using more land,” he said.

“There are examples all over the world of density made with great elegance, great beauty, great functionality and made on a human scale, which allows people to live in a place and also to have active streets and an active life around them.

“It can be done, we’re just not doing as good a job here as we could be because we tend to keep using the same methods over and over again.

“It would require the state government to incentivize one way or another, because the big hurdle is ultimately the private sector that has developed its business model and is reluctant to change it.”

QCOSS CEO Aimee McVeigh said the state government needed to focus more on social housing and called for a commitment from the top for 5,000 social housing units to be built each year for the next decade.

“People living in cars, tents and motel rooms, young and old surfing on couches and rough sleepers need to be front and center,” McVeigh said.

“These people are in Brisbane, Cairns, the Darling Downs, the Gold Coast and in regional, rural and remote towns.

“This summit must commit to ensuring that every Queenslander has a roof over their head by 2032, and that 5,000 social housing units are built each year for the next decade.”