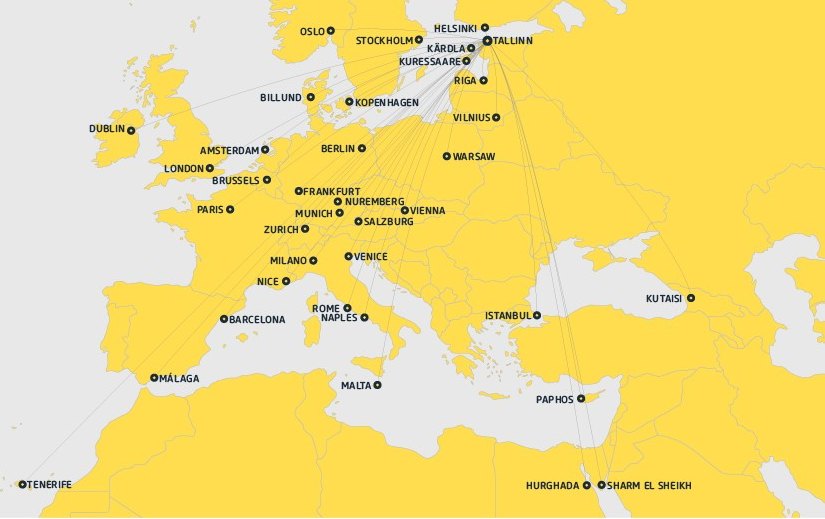 Tallinn Airport will transition to its winter schedule at the end of October. For passengers, this will mean a choice of 40 destinations to which they can fly direct from Tallinn. They include daily flights to London, with the British capital now served by three airlines. Winter will also see the resumption of regular flights to Cyprus, and the Dublin route is now open all year round.

Traditionally, the winter season brings fewer flights than summer, which means less hectic and more comfortable journeys for passengers. “Our winter program has something for everyone, whether they want to get away to the city, go skiing or escape to warmer climes,” said Eero Pärgmäe, board member of Tallinn airport.

The choice of destinations for city breaks includes some of Europe’s biggest attraction maps: Berlin, London, Paris and Rome. “But places like Vienna, Nuremberg and Istanbul are also ripe for exploration,” Pärgmäe recommended. He added that Tallinn Airport’s winter timetable includes up to seven destinations for winter sports enthusiasts. “Anyone thinking of hitting the ski slopes can choose to fly to Salzburg, Milan, Munich, Zurich, Nuremberg, Vienna or Venice Treviso, all of which are well connected to some of the best resorts in Europe,” he said. he explains.

Package tourism also remains popular, with charter flights to Tenerife, Hurghada and Sharm el-Sheikh. “Travel to these resorts can be booked through travel agents,” said Pärgmäe, who added that Ryanair will resume flights to the Cypriot town of Paphos for the winter season.

Although the peak travel season has passed, Pärgmäe says people are still more interested in travel than ever. “The huge queues we saw at European airports in the summer are now largely under control and the quality of flight services is recovering rapidly,” he said. “We’ve all drawn conclusions from the lessons we’ve learned this summer, and preparations for disruption-free winter and summer 2023 schedules are already underway.”