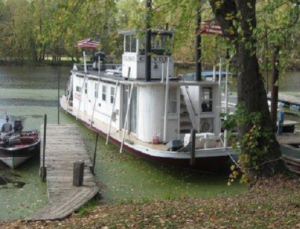 Thursdays are my “writing days” when I sit at my computer and wonder what to write for the next river column in the NKyTribune. This week is child’s play. No sweating. The material for Sunday’s doodle is pre-arranged, because ten years ago today, Saturday, June 16, 2012, I encountered one of my most memorable days on the river.

On May 17, a month earlier at the Great River Marina, Alma, Wisconsin, I sat at the oak galley table of the paddle steamer CLYDE, a 53-foot replica of the 1870 rafter of the same name, and j scribbled my John Henry on the signature line at the bottom of my check. Within minutes, the paddle steamer became my property after the boat builder, Ed Newcomb, served notice by completing the necessary paperwork for the ownership transition. Watching the arrangement was Everett Dameron, a friend from Covington, Kentucky, our hometown, and my only companion and crew member for Alma’s next 1,300 delivery to Aurora, Indiana, through the Upper Mississippi rivers. and Ohio.

On May 17, a month earlier at the Great River Marina, Alma, Wisconsin, I sat at the oak galley table of the paddle steamer CLYDE, a 53-foot replica of the 1870 rafter of the same name, and j scribbled my John Henry on the signature line at the bottom of my check.

From when I took possession of the CLYDE to when we finally pushed back, it was 26 days, including one trip, by my trusty van, which I still drive at the time of this writing, until to the Tennessee River in Decatur, Alabama to pick up several items from my other boat, the SUN*FISH. Several important pieces of equipment recovered from the SUN*FISH most likely saved the CLYDE and her crew.

When Ev and I arrived in Alma on June 4 with a 15ft rental truck full of gear, including the 13ft aluminum skiff, BUSTER, a sturdy 75lb anchor and 100ft nylon from a inch mooring line, the CLYDE was, as noted in the logbook, “patiently awaiting her crew for the long journey to her new home some 1,300 miles by water”. Without the line, the anchor and BUSTER-the-Skiff, we might not have gotten the CLYDE to Aurora in time.

“The only thing we weren’t using was a pop rivet gun, and when I tried to use it not long ago…. it was broken,” I remember commenting after the trip. During such an uncertain journey, everything imaginable was packed aboard the 15-foot U-haul and flown north to Alma.

Shortly after a hearty breakfast of pancakes and robust steaming coffee, on Tuesday, June 12, 2012, calliope expert Jonathan Tschiggfrie and CLYDE builder Ed Newcomb showed up for the paddle steamer’s departure on his epic trip to the Ohio River.

Shortly after returning to Alma, my insurance agent informed me that our underwriter had only given us 30 days of coverage. So instead of a leisurely odyssey retracing the routes I had taken on the Steamer AVALON and the DELTA QUEEN, it turned into a race before insurers canceled CLYDE’s coverage.

Meanwhile, the river was approaching the flood stage resulting in heavy rain before we returned. As a result, we had to experience several days of delay. Nonetheless, the Great River Marina proved to be the perfect place to enjoy cool nights and pleasant company around the harbour. Looking back, our stay there was one of the most enjoyable events of the trip.

Shortly after a hearty breakfast of pancakes and robust steaming coffee, on Tuesday, June 12, 2012, calliope expert Jonathan Tschiggfrie and CLYDE builder Ed Newcomb showed up for the paddle steamer’s departure on his epic trip to the Ohio River. Jon would follow the start of our adventure from the shore, while Ed planned to travel to Dubuque to show the fledgling crew “the ropes”.

Everett Dameron, a friend from Covington, Kentucky, our hometown, and my only companion and crew member for the next delivery of 1,300 people from Alma to Aurora, Indiana, via the Upper Mississippi and Ohio rivers.

At the end of the first day, the CLYDE found itself in Pettibone Boat Harbour, some 51.1 miles downstream from Great River Marina.

At noon on the second day, June 13, CLYDE passed Lancing, Minnesota; the farthest the boat has ever been on the Mississippi. But, as stated, “every turn of the wheel marks the history of the pretty paddle steamer”.

The next day, June 14, at 2:15 p.m., CLYDE entered the ice port of Dubuque, Iowa, exactly where the Iowa Iron Works built the CLYDE’s namesake in 1870. Ed departed the CLYDE, leaving Ev and me alone.

A note from the time: “At any moment we expected an eviction from the unfinished port. Instead, while using our CLYDE as a reference model, museum docents (National Mississippi River Museum & Aquarium) educated visitors on the original CLYDE, built at this very location as the first hulled steamer of iron on the upper Mississippi.

Without the line, the anchor and BUSTER-the-Skiff, we might not have gotten the CLYDE to Aurora in time.

Early the next morning, June 15, the CLYDE slid out of the icy harbor past the sleeping M/V TWILIGHT, the late Captain Dennis Trone’s speedy passenger steamer, and finally through the open swing span of the railway bridge history of Sabula.

Approaching Pelican Island, the stench informed us of the waterfowl long before the CLYDE came abreast of the island. Lock 13 came and went, but not before the angry lock keeper scolded me for my boat dripping oil in his lock. This was the first time I knew the starboard impeller motor was leaking hydraulic fluid. My biggest fear was that the lock keeper would call ahead and tell his lock 14 counterpart to stop us using that lock. Luckily he didn’t, and the CLYDE docked for the night at a small dock in LeClaire, IA, above the original installation of the TWILIGHT, the old steam ferry, the CITY OF BATON ROUGE, a steamer I rode often while I was a deckhand on the Steamer AVALON whenever we played in the Louisiana capital.

Saturday June 16 started early. Cloudy, warm, with showers. Ev and I were up at 4:30 a.m. because I had a paddlewheel part to fix. At 8:30 a.m. I finished chocking two 2X4s on two rotten wheel arms radiating from the center wheel shaft like the spoke of a wheel. The “helpers,” as I called them, lasted until fresh white oak antlers replaced the rotting arms at Aurora, more than 1,000 river miles from LeClaire.

At any moment we expected an eviction from the unfinished port.

Instead of continuing downstream directly to Lock 14, the U.S. Corps of Engineers ordered CLYDE to detour through the LeClaire Canal and use the smaller Lock 14A. “Ev has followed an excellent course”, notes the logbook. Once across 14A, the CLYDE entered the main channel crossing what had been the Moline Rapids with “rocks as big as houses” outside the buoy line. Backwaters at Lock and Dam 15 at Rock Island, IL, have drowned the rapids, but traversing the area remains a hazard to loaded barges and deep-draught vessels entering the outside navigational aids. The CLYDE, drawing no more than a meter of water, was in little danger. Yet the careful boatman must respect government aids in places such as an ancient white-water rapid with stones more immense than the CLYDE itself, patiently waiting to remove the bottom of any careless or careless vessel .

Approaching Lock 15 at Rock Island from above, the lock chamber is under the point at the height of Colonel Davenport’s historic house. With the river flowing directly towards the dam and a strong breeze blowing in the same direction, the CLYDE tended to drift into treacherous waters falling over the world’s largest roller dam instead of venturing towards the lock. After turning around at least three times, the CLYDE finally cooperated and entered the great chamber. Lock 15 is one of the few locks in the upper Mississippi with a completed auxiliary chamber.

A 50mph gust of rain slammed the CLYDE and drove the paddle steamer onto a mudflat.

Once inside the lock, Judy Patsch, a well-known steamboat enthusiast, crew member and all-round ‘lady of the river’, waited impatiently on the wall of L&D 15 to see the CLYDE.

Leaving Lock 15 behind, CLYDE passed under the Centennial Bridge and the dreaded swing span of the railway bridge below, a bane to many tug pilots. Past the bridges, the paddle wheel seemed to turn more slowly, while the steering became limp. Then, suddenly, the following logbook entry screamed:

After the engine overheated on the main course of the river and we dropped anchor, it soon became apparent that the CLYDE was in the main channel of the Mississippi. Seeing a close entrance to Andalucia Slough, we waited for the motor to cool enough to restart and limped with minimal power through the quagmire waiting for the power to let go. Surprisingly, the current ran even faster within the narrow confines of the quagmire.

Once inside the lock, Judy Patsch, a well-known steamboat enthusiast, crew member and all-round ‘lady of the river’, waited impatiently on the wall of L&D 15 to see the CLYDE.

At the same time, a 50mph gust of rain slammed the CLYDE and drove the paddle steamer onto a mudflat. After the storm passed, help came in the form of the first of those who suddenly appeared when help was badly needed, the people Ev and I called “the angels of CLYDE”. Without asking, a mighty ski boat gratefully pulled the paddle steamer off the mudflat. Otherwise, with a falling river, the CLYDE could have spent the summer there, high and dry.

LOG:
June 16, 2012
* Pulled out by ski-boat – hook dropped again.
* Hydraulic fluid in reservoir at 3″. Ed called and confirmed, “Low.”
* Hydraulic fluid in the central hold…
(Note: CLYDE NEVER caused an oil spill. This hydraulic fluid remained on board in the hold until the end of the voyage and was safely recycled.)
* Here to stay… At least for a while.
* Turn off the MARJESS oil lamps – they burned all night.
* Exhausted. I went to bed later.

Such was my day ten years ago, on June 16th. Would I do it again if I could?

Of course, yer dern tootin’ I would.

Pulled out by ski-boat – hook dropped again. Here to stay… At least for a while.